Migrants and refugees: men and women in search of peace

Dear Brothers and Sisters, Happy Christmas!
In Bethlehem, Jesus was born of the Virgin Mary.  He was born, not by the will of man, but by the gift of the love of God our Father, who “so loved the world that he gave his only-begotten Son, that whoever believes in him should not perish but have eternal life” (Jn 3:16).
This event is renewed today in the Church, a pilgrim in time.  For the faith of the Christian people relives in the Christmas liturgy the mystery of the God who comes, who assumes our mortal human flesh, and who becomes lowly and poor in order to save us.  And this moves us deeply, for great is the tenderness of our Father.
The first people to see the humble glory of the Saviour, after Mary and Joseph, were the shepherds of Bethlehem.  They recognized the sign proclaimed to them by the angels and adored the Child.  Those humble and watchful men are an example for believers of every age who, before the mystery of Jesus, are not scandalized by his poverty.  Rather, like Mary, they trust in God’s word and contemplate his glory with simple eyes.  Before the mystery of the Word made flesh, Christians in every place confess with the words of the Evangelist John: “We have beheld his glory, glory as of the only-begotten Son from the Father, full of grace and truth” (Jn 1:14).
Today, as the winds of war are blowing in our world and an outdated model of development continues to produce human, societal and environmental decline, Christmas invites us to focus on the sign of the Child and to recognize him in the faces of little children, especially those for whom, like Jesus, “there is no place in the inn” (Lk 2:7).
We see Jesus in the children of the Middle East who continue to suffer because of growing tensions between Israelis and Palestinians.  On this festive day, let us ask the Lord for peace for Jerusalem and for all the Holy Land.  Let us pray that the will to resume dialogue may prevail between the parties and that a negotiated solution can finally be reached, one that would allow the peaceful coexistence of two States within mutually agreed and internationally recognized borders.  May the Lord also sustain the efforts of all those in the international community inspired by good will to help that afflicted land to find, despite grave obstacles the harmony, justice and security that it has long awaited.
We see Jesus in the faces of Syrian children still marked by the war that, in these years, has caused such bloodshed in that country.  May beloved Syria at last recover respect for the dignity of every person through a shared commitment to rebuild the fabric of society, without regard for ethnic and religious membership.  We see Jesus in the children of Iraq, wounded and torn by the conflicts that country has experienced in the last fifteen years, and in the children of Yemen, where there is an ongoing conflict that has been largely forgotten, with serious humanitarian implications for its people, who suffer from hunger and the spread of diseases.
We see Jesus in the children of Africa, especially those who are suffering in South Sudan, Somalia, Burundi, Democratic Republic of Congo, Central African Republic and Nigeria.
We see Jesus in the children worldwide wherever peace and security are threatened by the danger of tensions and new conflicts.  Let us pray that confrontation may be overcome on the Korean peninsula and that mutual trust may increase in the interest of the world as a whole.  To the Baby Jesus we entrust Venezuela that it may resume a serene dialogue among the various elements of society for the benefit of all the beloved Venezuelan people.  We see Jesus in children who, together with their families, suffer from the violence of the conflict in Ukraine and its grave humanitarian repercussions; we pray that the Lord may soon grant peace to this dear country.
We see Jesus in the children of unemployed parents who struggle to offer their children a secure and peaceful future.  And in those whose childhood has been robbed and who, from a very young age, have been forced to work or to be enrolled as soldiers by unscrupulous mercenaries.
We see Jesus in the many children forced to leave their countries to travel alone in inhuman conditions and who become an easy target for human traffickers.  Through their eyes we see the drama of all those forced to emigrate and risk their lives to face exhausting journeys that end at times in tragedy.  I see Jesus again in the children I met during my recent visit to Myanmar and Bangladesh, and it is my hope that the international community will not cease to work to ensure that the dignity of the minority groups present in the region is adequately protected.  Jesus knows well the pain of not being welcomed and how hard it is not to have a place to lay one’s head.  May our hearts not be closed as they were in the homes of Bethlehem.
Dear Brothers and Sisters,
The sign of Christmas has also been revealed to us: “a baby wrapped in swaddling clothes” (Lk 2:12).  Like the Virgin Mary and Saint Joseph, like the shepherds of Bethlehem, may we welcome in the Baby Jesus the love of God made man for us.  And may we commit ourselves, with the help of his grace, to making our world more human and more worthy for the children of today and of the future.
I offer a warm greeting to all of you, dear brothers and sisters from throughout the world gathered here in this Square, and to all those who in various countries are joined to us by radio, television and other communications media.
May the birth of Christ the Saviour renew hearts, awaken the desire to build a future of greater fraternity and solidarity, and bring joy and hope to everyone.  Happy Christmas! 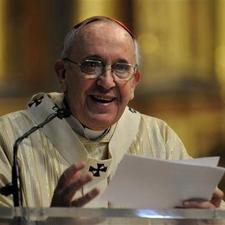 On March 13th, 2013, at 7:06pm, Cardinal Jorge Mario Bergoglio of Buenos Aires, Argentina was elected as the 266th pope of the Catholic Church. Here are nine things you should know about Pope Francis.

1. Bergoglio was born in Buenos Aires in 1936. His father was an Italian immigrant

2. He’s the first pope from South America. The only remaining continents that have never had a pope come from their lands are Australia, Antarctica, and North America.

4. He only has one lung. His other lung was removed due to infection when he was a teenager

5. Bergoglio is known for his personal simplicity. In Argentina he lived in a simple apartment rather than the archbishop’s palace, cooked his own meals, and gave up his chauffeured limousine in favor of taking the bus to work.

6. In 2010, when Argentina became the first Latin American country to legalize same-sex marriage, Bergoglio encouraged clergy across the country to tell Catholics to protest against the legislation because, if enacted, it could “seriously injure the family” and that gay adoption would be “depriving (children) of the human growth that God wanted them given by a father and a mother.”

7. He studied and received a master’s degree in chemistry at the University of Buenos Aires, but later decided to become a Jesuit priest and studied liberal arts at the Catholic seminary in Santiago, Chile.

9. Last year, Bergoglio compared Catholic priests who refused to baptize the children of unwed mothers to the Pharisees of Jesus’ day. “These are today’s hypocrites. Those who clericalize the Church,” he said, adding, “Jesus teaches us another way: Go out. Go out and share your testimony, go out and interact with your brothers, go out and share, go out and ask. Become the Word in body as well as spirit.”

LifeSiteNews editor's note: To this list we would add a 10th "must know" fact. That Cardinal Bergoglio has strongly condemned abortion, even in cases of rape. In a 2007 speech given to a gathering of priests and laity on October 2nd, then-Cardinal Bergoglio issued a defense of life even in cases of rape saying: "we aren’t in agreement with the death penalty," but "in Argentina we have the death penalty.  A child conceived by the rape of a mentally ill or retarded woman can be condemned to death."